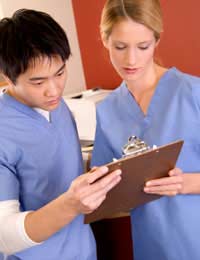 Crohn's Disease is one of the many inflammatory bowel diseases that cause irritation swelling, and inflammation of the intestines. The most common symptoms of Crohn's disease are similar to those of colitis and irritable bowel syndrome. However, there are distinctions that make diagnosis and treatment easier and more effective.

Is It Crohn's Disease?

The exact cause of Crohn's disease has yet to be discovered, however, many theories exist to explain its onset. Many doctors believe that Crohn's is caused by an immune system reaction in the intestines. The immune system works to keep the body healthy by detecting and attacking foreign matter in tissues, organs, and body systems. In the case of Crohn's doctors believe that the immune system mistakenly attacks food particles and bacteria that are normally found in the intestine. This mistaken reaction happens over and over again and leads to the inflammation and swelling of the small intestine.

The Symptoms of Crohn's Disease

Although the cause of Crohn's cannot be agreed upon the most common symptoms associated with the disease can be. Individuals who suffer from Crohn's disease usually experience diarrhoea and lower abdominal pain. As the disease progresses other symptoms, such as weight loss, cramping, fever, and rectal bleeding, may occur. In some cases, individuals with Crohn's also suffer from skin problems, anaemia, and arthritis. In all cases the symptoms of Crohn's can vary in severity, frequency, and duration.