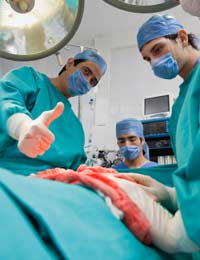 If you are experiencing general abdominal pain you may have inflammation of the appendix. The appendix is a small narrow tube-like organ that is attached to the colon. The walls of this organ contain lymphatic tissue that produces antibodies to aid the immune system. If the lining of the walls of the appendix become inflamed the result can be appendicitis.

Once swelling occurs in the appendix the bacteria that are normally found in this area start to build up and attack the cells that line the walls of the appendix. The body responds to this attack with antibodies, which cause inflammation in the tissue as they fight the bacteria. If the inflammation or swelling becomes too severe the appendix can rupture and bacteria can leak into the surrounding tissue.

The Symptoms of Appendicitis

The most common symptom of appendicitis is abdominal pain. However, the pain is not usually localized, as in it is not easily pinpointed to the exact location of the appendix. Instead, sufferers usually express a general abdominal pain in a large area of the stomach. This vagueness often makes it difficult for doctors to immediately diagnosis the cause of the pain as appendicitis.

After the abdominal pain sets in and as the inflammation becomes more severe, individuals may begin to experience other symptoms. Generalized pain is usually followed by loss of appetite, nausea, and vomiting. Once the inflammation spreads to the lining of the abdomen a more localized pain is felt in the right side of the stomach. More specifically pain is noticed between the belly button and hipbone, but always on the right side of the body. If the inflammation continues to worsen a rupture may occur in the lining of the appendix and the abdominal pain is once again felt throughout the entire stomach.

Appendicitis or Another Abdominal Condition?

Because the pain associated with appendicitis is very vague in exact location and because the symptoms of appendicitis are very similar to a few other conditions, doctors must first rule out those conditions before making a diagnosis.

The symptoms of diverticulitis, pelvic inflammatory disease, ulcers, gallbladder disease, and kidney disease can all mimic the symptoms of appendicitis. The diverticulum can be located on the right side of the body near the appendix. If rupture occurs it can produce inflammation in the area that is very similar to that felt with appendicitis. The same is true in the cases of gallstones and ulcers. These two conditions can affect the lower right side of the abdominal causing pain in the area usually associated with a ruptured appendix.

Pelvic inflammatory disease involves the inflammation of the ovary or fallopian tube in sexually active women. When this inflammation occurs on the right side of the body the location of the pain can be mistaken for signs of appendicitis. The same is true for kidney disease that affects the right kidney. Since the kidney is so close in locale to the appendix the pain can be mistaken for the symptoms of appendicitis.

Since these symptoms are all so similar it is very important that further tests be conducted to determine the exact cause of the pain. Once a correct diagnosis is made the most accurate treatment can be begun.