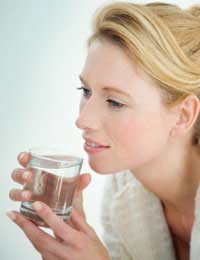 Stomach pain can have a number of different causes, from digestive problems and organ disease to infections and viruses. When a virus is to blame the most common symptoms of stomach pain are abdominal cramping nausea, Diarrhoea and vomiting. The best way to alleviate the pain associated with these symptoms is to understand the causes.

The most common stomach infection is the flu, also called influenza. This ailment is caused by the invasion of a virus and the episode of pain and symptoms can last from one to seven days. Another form of the flu is the 24-hour flu, sometimes called a 24-hour bug. This ailment is different from influenza in that the symptoms typically only last 24 hours. Both of these stomach bugs are highly contagious (meaning they can easily be passed form one person to another) and generally clear up on their own without medical attention or medications.

Another stomach bug responsible for abdominal symptoms is Food Poisoning. Food poisoning occurs when water or food has been contaminated with parasites. This contamination can occur from improper food preparation, improper food storage, unclean supplies of drinking water, and tainted shellfish.

The Symptoms of a Stomach Bug

Although the exact cause of stomach pain may vary, the symptoms produced by a stomach infection or bug are usually the same. Because of this similarity the cause of symptoms will be difficult to diagnose. That is the reason that most doctors take a 'wait and see' attitude when patients complain of general stomach pain or common stomach symptoms. Once a virus can be ruled out, however, medication can be given to cure most other stomach ailments. Unfortunately, when a virus is the cause, the only available treatment is symptom relieve. Antibiotics do not kill viruses and the body's immune system will eliminate most viruses within a few days.

The most common symptoms of stomach infections and bugs are:Typically, the severity of these symptoms will vary based on how severe the infection is, as well as what type of infection it is.

How Long will the Stomach Pain Last?

If the cause of stomach pain is a common infection or bug, the pain and other symptoms will subside in just a few days. If symptoms last longer than five days, or if they come and go over a period of two weeks, the pain can be an indication a more serious stomach condition.

Since antibiotics are ineffective at treating viruses the only available treatment is self-care and symptom management. The following tips are very effective at relieving stomach pain and reducing the severity of stomach bug symptoms.As long as the cause of your stomach is viral these tips should help you relieve the symptoms. If symptoms persist, or last longer than five days, you should see your doctor to Diagnose Your Illness. The pains could be a sign of another, more serious condition that will require medication or other types of medical treatment.

Reduce Your Alcohol Intake
Share Your Story, Join the Discussion or Seek Advice..
[Add a Comment]
I was sick at 10 am and have not been sick since it is now 6 pm is it a bug or could it just be that I'm tired
xboxgamer - 21-Apr-16 @ 6:01 PM
Hi sometimes I can get stomach pains but I dont throw up down the loo or have period pains as well.
Emma - 16-Apr-16 @ 5:06 PM
Thank you for this I have had it today and you have made me feel a lot safer after reading this and if I didn't read this I may feel unsafe because you told everything thanks alot
Jamie - 20-Feb-16 @ 7:54 PM
i think i have tummy bugs been going to doctors the past4-5yrs ago i was in carswell texas in 2003 got out 2007 righter 2008 it begin dortors did all of tests and came back and sayed notthing wrong so what do i doknow please help me wellness mama
cherry - 27-Sep-12 @ 3:20 AM
I am absoutely infuriated by people who go out and infect others. If you've just been sick or were sick in the night, you have no business going to a crowded public place and infecting everyone else. Honestly. Did a class at my gym 2 days ago, the woman in front of me was clearly ill and complaining to her friend she'd been sick in the night, and she had to sit out part of the class with her head in her hands. 2 days later I've got it, woke up at 3am sick, and I'm effing furious. This isn't the first time someone has gone out into a confined area with lots of people, knowing they are infectious, where I've ended up catching it off them. People are so irresponsible. I understand if it's work, and you fear your job, or if you absolutely have to be somewhere, but a gym class, in a closed, hot environment where infection spreads like wild fire? It's so bl**dy selfish. Stay the f*ck home next time. People ought to be fined for going out infectious. Why can't we follow japan and show a bit of courtesy to others when we are ill? I'm sick of people going round spluttering in public - a few months ago I suffered a chest infection, and a lingering cough that lasted over a month, and I clearly remember, a few days before I got this, a woman behind me in gym class spluttering all over the place, not covering her mouth. It's NOT ON.Please do NOT go out and infect others if you are ill, it is not fair on other people. I am in bed now ill, I've missed a day out with a friend now because of it, and I shouldn't be ill in bed - I know it's this woman as this was the only place I went to in those 2 days and I havent been round anyone else who has been ill.I cannot believe some people. I really do think that 90% of the time I get ill, it's because other people haven't taken precautions not to infect others, knowing they are infectious. When I'm ill, I stay home, and if I have to go out, say as an errand I need to do, I am careful not to cough or infect others. Why can't other people do the same?
Danicali - 7-Aug-12 @ 11:00 AM
The noroviruses that have been going around for the last couple of years are examples of bugs that attack the stomach, resulting in both diarrheoa and vomiting that typically last for about 24 hours. If you get one of these there's nothing you can do about it except keep a bowl by the bed and be prepared to tun to the toilet. Usually, with any stomach bug, you 'll feel quite weak for a day or two after it passes, and if it hasn't gone in three days go and see your GP to be properly diagnosed.
Jean - 2-Jul-12 @ 10:19 AM
For the last week and a half, I have been experiencing nausea feelings in my tummy that happen on and off all day. This recently got 10x worse a few days ago. Also, I have been having shooting pains in my lower abdomen that also happens on and off each day. My breasts have also become tender over the last week and I am two weeks late. However, when I went in to the dr they did a urine sample and it came back negative for pregnancy and negative for a UTI. The dr had no definite answer as to what is going on. Could some one please help me with some possible answers?
Molly88 - 13-Mar-12 @ 8:42 PM
I have had abdominal pain for about 3 months. My doctor has done blood tests for many things including pancreas, kidneys,bacterial infections and wheat intolerence to name just a few - all tests were normal. I've had an ultasound scan which also could find nothing wrong. I do not have any other symptoms and also had a routine bowel screening test, which came back clear, last March. Most of the time the pain is quite mild. Although I am 70 years old, I am otherwise healthy and have never needed medical treatment for anything other than very minor conditions before. Any ideas or suggestions of what it could possibly be?
beth - 20-Nov-11 @ 7:19 PM
Why is my stomock hurting after sex or first thing in the morning,I get pains just under my belly button?
psychicsarah - 27-Jul-11 @ 2:34 PM
Thank-you for all the useful information that you put on the site. I feel a great amount better now that I understand what was making me feel ill.
Holly - 23-Jul-11 @ 10:47 PM
Title:
(never shown)
Firstname:
(never shown)
Surname:
(never shown)
Email:
(never shown)
Nickname:
(shown)
Comment:
Validate: