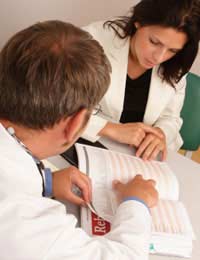 Acute endometritis is short-term inflammation of the endometrium caused by infection. Infections can begin in the area through the use of non-sterile medical instruments, complications during abortion, compromised child birth, repeated pelvic exams, and through residual fragments of placenta being left in the uterus after abortion or childbirth.

Although the causes of endometritis can differ the symptoms are almost always the same. Common symptoms of endometritis include pain or cramping in the lower abdomen, abnormal vaginal bleeding, abnormal vaginal discharge, increased vaginal discharge that is abnormal in quantity, colour, consistency, or smell, high fever, constipation, and pain during bowel movements. Symptoms of chronic endometritis can also include severe pain with menstruation, heavy bleeding, and nausea.

When the above symptoms are presented to a doctor for diagnosis he or she will run several tests to confirm or rule out endometritis. The most common tests performed are blood tests such as a WBC (white blood count) which checks for the presence of infection and ESR (sed rate), endocervical cultures from vaginal swipes or scrapes, which help diagnose chlamydeous and other infections, endometrial biopsies to identify abnormal cell structure, and laparoscopy to remove infected tissue for further study. Once endometritis has been confirmed proper treatment can be prescribed.

During treatment for endometritis it is important that the patient get plenty of rest, that they remain well hydrated, and that they use a condom when engaging in sexual activity. In some cases the partner of an infected person will also need to treatment with a course of antibiotics. If treatment with antibiotics is unsuccessful the condition can become more serious. Untreated endometritis or resistant endometritis can lead to septic shock, infertility, and the formation of uterine abscesses.