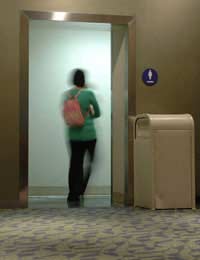 The Three Most Common Symptoms of Crohn's Disease

In all cases of Crohn's Disease there are three symptoms that are always present- diarrhoea, fever, and abdominal pain. Diarrhoea occurs when the swelling and inflammation of the small intestine interferes with the organ's ability to process and breakdown food particles properly. When the small intestine is unable to pull enough water from the food watery, loose stools are produced. Individuals who have been diagnosed with Crohn's Disease suffer from frequent bouts of diarrhoea (and in some cases stool that is mixed with thick, dark blood), and increased bowel movements.

Fever is also a common symptom of Crohn's Disease due to the presence of inflammation in the small intestine. When inflammation is present in the body the immune system attacks the irritation in an attempt to rid the body of illness. This attack is characterised by an increase in overall body temperature. Depending on the severity of the condition and the frequency of digestive flare-ups, the degree of the fever can vary. During acute attacks fevers are higher, and between attacks most individuals run a persistent, low-grade fever.

Other Possible Symptoms Of Crohn's Disease

Aside from the three main symptoms of Crohn's Disease individuals may also experience weight loss, loss of appetite, feelings of fatigue, and rectal bleeding. The weight loss, loss of appetite, and fatigue are usually caused by the sufferer's inability to process food properly. Without proper nutrition and calories patients lose weight and lack the stored energy to power most activities. Repeated abdominal pain can cause patients to avoid eating, or interfere with the stomach's normal hunger signals.

Since the symptoms of Crohn's Disease are very similar to those of many different inflammatory bowel diseases it is best to track your symptoms for a few weeks before seeing a doctor. Your doctor can use your symptom information to distinguish between the possible disorders that could be causing your symptoms in order to reach a more accurate diagnosis.