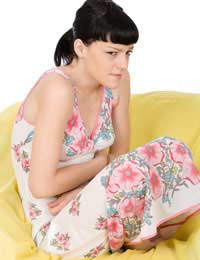 Endometritis is the medical term for the inflammation of the lining of the uterus also called the endometrium. When irritation develops the uterus becomes inflamed and symptoms are produced in the pelvic area. However in some cases the endometrial tissue that makes up this lining will attach to other organs, such as the bladder, and produce abnormal symptoms that differ from uterus symptoms.

The causes of endometritis include sexually transmitted infections, such as chlamydia, abortion, the insertion of an intrauterine birth control device, and some complications from surgery. No matter what the cause, most cases of endometritis share the same four common symptoms.

The four most notable symptoms of endometritis include increased vaginal discharge, foul smelling vaginal discharge, lower abdominal pain, and fever. The increased and foul-smelling discharge is caused by the infection that is present in the area. The symptom of fever is also caused by the presence of infection since a fever is the body's way of attacking infection and fighting its spread through the body. The abdominal pain is caused by the increased inflammation and irritation of the uterus lining, which results in a soreness of the area. This pain can also worsen during the act of intercourse due to the pressure on infected tissues during penetration, sometimes to the point where intercourse in no longer possible until treatment has begun.

Most women who suffer from endometritis will also suffer from increased pain during menstruation. This condition, also known as dysmenorrhoea, results in increased pain in the back, lower abdomen, vaginal, and rear pelvic areas. Unlike normal menstrual pain, which is described as a cramping sensation brought on by the contractions of the uterus and usually localised to the mid-abdominal area, this pain more pronounced, less cramp-like, and usually develops six or seven days before the period of heaviest menstrual flow. Also unlike normal menstrual cramping, which usually occurs during the first twenty-four hours of menstrual flow, endometrial pain can last for up to three days.

Other Possible Symptoms of Endometritis

When a woman notices symptoms that are not characteristic of endometritis she is probably suffering from endometritis that has moved outside the uterus area. When endometrial tissue attaches to organs other than the uterus the symptoms produced can vary depending on the affected area. Common symptoms associated with this type of endometritis include general stomach discomfort, nausea, vomiting, painful urination, bleeding from the rectum, abnormal vaginal bleeding, constipation, and abdominal swelling and pain during bowel movements.

When the Symptoms Do Not Point to Endometritis

Although the symptoms of endometritis are fairly characteristic of the condition, they can be similar to the symptoms produced by other illnesses. If you are suffering from any of the above symptoms it is best to schedule an appointment with your doctor so that he or she can rule out other conditions such as pelvic infection, birth control problems, menstruation problems, and ovarian cysts. Once an accurate diagnosis has been made effective treatment can be started to offer the most relief from symptoms.

Symptoms of Acid Reflux
Share Your Story, Join the Discussion or Seek Advice..
want to do had a smoth bugs want do and take for it
bella678 - 19-Aug-12 @ 12:26 AM
I have really bad tummy pains on my lower left side and feel very sick and sometimes am sick I'm also feeling very tired all the time and have blood in my poo mixed in
lulu247 - 5-Sep-11 @ 7:44 PM
Title:
(never shown)
Firstname:
(never shown)
Surname:
(never shown)
Email:
(never shown)
Nickname:
(shown)
Comment:
Validate: